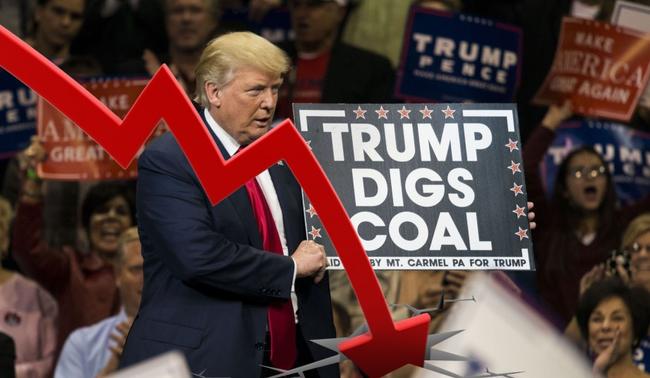 
When President Trump campaigned across coal-mining producing states in 2016, he told industry leaders and workers that it was Barack Obama’s strict environmental regulations that doomed them.

In late 2016, the president, then a Republican candidate, told coal miners in West Virginia: “We’re going to take care of years of horrible abuse. I guarantee it.”

But new data reveals a troubling trend for the president’s attempt to revive the coal industry, one that suggests the recovery has yet to materialize, but rather the great bust cycle in coal continues to gain momentum. We noted, as early as 2016, the president wouldn’t be able to save the dying industry.

Bloomberg’s Justin Fox wrote a new opinion piece Monday outlining the demise of coal under the Trump administration. He sourced government data from the EIA that shows US power generation from coal just recently hit a five-decade low.

Fox wrote, “Renewables will most likely surpass the fossil fuel in electricity generation this year despite the Trump administration’s efforts to prop it up.”

The decline of coal has accelerated since President Trump took office.

Readers may recall, President Trump promised to “end the war on coal” in 2016:

“Oh, coal country – what they have done… You are amazing people and we’re going to take care of a lot of years of horrible abuse – you can count on it, 100%… If I win, we’re going to bring those miners back to work – you’re going to be so proud of your president and your country. You’re going to be back to better than ever before and that means all kinds of energy. We never want to be in a position like we were in before, where we were literally controlled by people.”

While many in the coal industry thought they were going to have friends in high places (i.e., the White House) that might have turned out not to be the case as a disorderly collapse of the industry continues with bankruptcies, liquidations, mine closures, and idled mines.

As we noted in summer 2019 (see: Trump Is Silent After Bankruptcy Wave Devastates Major Coal Producers), the administration, who once routinely pumped the coal industry in daily headlines, is nowhere to be found cheerleading the industry. Instead, the Trump administration is cheering the Nasdaq hitting record highs as the real economy falters.

Thanks for playing coal miners…