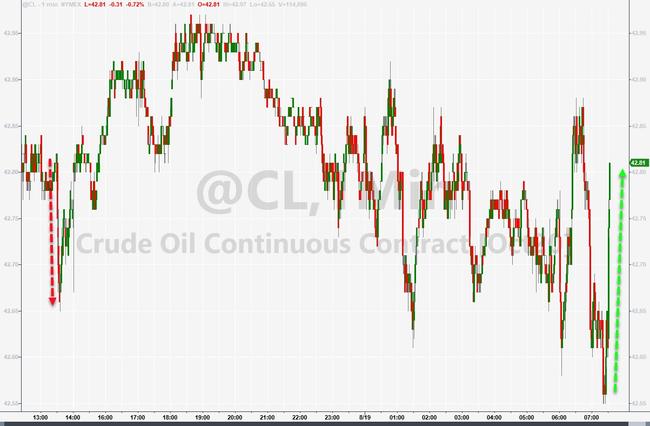 
Oil prices have lagged since API reported a large surprise gasoline stock build, raising new questions about the ‘recovery’ demand expectations. Additionally, OPEC+ is meeting later today to discuss their deal, amid signs physical oil prices are weakening as the group this month started unwinding some of its record output cutbacks.

“The organization is likely to spend a lot of time discussing compliance, especially Iraqi…

One message is likely to be crystal clear though, and that is ‘no cheating is allowed’ for members that are eager to be undercompliant.”

But for now, all the algos care about are inventories and production.

Analysts expected a fourth straight week of crude draws and were right but the draw was smaller than expected (-1.63mm vs -3.29mm exp) but official gasoline stock data saw a draw (refuting the worries from API’s build)

As Bloomberg’s Michael Jeffers notes, summer gasoline may have already reached its peak after plateauing in July. Seasonally, demand typically declines going into fall, but this year we’re ending the summer with stockpiles at the highest level for this time of year in data going back in 1991.

US crude production was unchanged last week, after a notable drop the previous week…

Well completions in the five major oil plays – Permian, Eagle Ford, Bakken, Anadarko and Niobrara – are at their lowest since 2014 (when the EIA started tracking this data).

Oil prices dipped on API, then were manic bid, but has slid all morning to trade around $42.60 ahead of the official inventory print, only to rebound modestly on the gasoline draw…

Finally, as Bloomberg’s Julian Lee notes, oil stockpiles may be coming down in the U.S., but that’s not the case in some other parts of the world. China’s onshore oil inventories are rapidly building and have risen by 17 million barrels, or 2%, in the first half of August, according to data intelligence firm Kpler. Meanwhile, the volume in floating storage off China’s coast is still above 80 million barrels, compared with an average of 6.9 million in 2019.