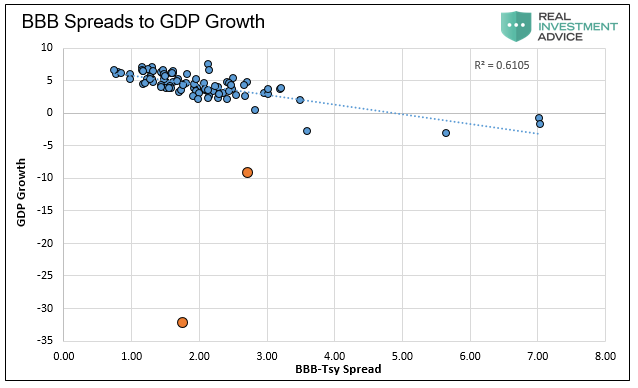 
Authored by Michael Lebowitz and Jack Scott via RealInvestmentAdvice.com,

“The current environment may be more uncertain and riskier than any we have seen in our lifetimes. Yet, spreads say the future has never been more certain.”

We recently wrote that line in The Markets Are Sending Confounding Messages. The article discusses a “metaphorical fog”, induced by central banks. The fog envelops all market signals and, in the process, take away all means of orientation. Investors, unaware of the fog, are pushing the pedal to the metal with little concern.

This article examines the corporate bond fog. In particular, we show how corporate yields are priced for perfection while the economy languishes in what some describe as depression.

There are many ways to quantify risk. For this article, we use the Economic Policy Uncertainty Index (EPUI).

EPUI is computed by Economic Policy Uncertainty. The index is comprehensive, as it uses three distinct underlying components to measure the degree of economic uncertainty. Per the organization, their methodology is as follows:

The index and its history can be found and downloaded on the St. Louis Federal Reserve’s web site.

The opening quote was from a section of the mentioned article where we discuss the gross mismeasurement of corporate bond risk. Specifically, corporate bond yields versus U.S. Treasuries are at minimal levels, reflecting a high degree of certainty and strength in the economy and financial conditions of corporations.

The fact of the matter is that over 90% of the world’s economies are in a recession. Second-quarter real GDP fell by an annualized rate of 32.9%. The last such decline was during the Great Depression.

While recovery may take hold, there is no guarantee it will last. Recovery has been fully supported by grossly unsustainable fiscal and monetary actions. There are serious questions as to whether these operations can continue.

Needless to say, confidence in the ability of corporations to thrive is misplaced today.  Historically, economic certainty and corporate spreads tend to follow the same path. Today, they are moving in the opposite direction.

To quantify this irrational deviation, we compare the EPUI and BBB-corporate/Treasury yield spreads.

The first graph below compares EPUI to BBB spreads. The higher EPUI, the more uncertainty. Similarly, the higher BBB spreads, the more investor insecurity is priced into bonds.

The second graph divides BBB-rated spreads by the EPUI to provide a comparative ratio. Traditionally, in environments like today, the ratio rises. Conversely, in times of a healthy economy with solid investor confidence, the ratio is low.

The current level of economic uncertainty in EPUI dwarfs prior extremes. BBB spreads are near historic lows. As a result, the ratio of the two rests at the lowest level in 20 years. This reading is untenable.

If the Fed were not rigorously manipulating yields, we would expect the ratio to be at the upper end of the graph. Yields should easily be into the double digits.

Another powerful way to measure the separation of reality and yield spreads is to equate GDP growth with corporate spreads. During economic slowing or a recession, corporate spreads should widen. When revenues decline, earnings are more dubious, and the ability to service debt therefore, is more difficult. Investors in such environments historically demand more protection in the form of higher yields.

The scatter plot below shows quarterly instances of GDP and BBB-rated corporate spreads dating back to 1997. As shown, the relationship is statistically relevant with an R-squared of .6105. To the human eye, the data also follows a well-correlated path. As GDP declines (y-axis) corporate spreads increase (x-axis) and vice versa. The two orange dots represent the exceptions to the rule, March 31 and June 30, 2020.

To estimate where yield spreads should be, we can draw a horizontal line to the right from the orange dots to their intersection with the dotted line. The point of juncture is off the charts, literally.  While Q2 was an anomaly, it is not an anomaly to assume a growth rate for 2020 of minus 10%. Based on the data above, at such a level, BBB spreads should be 11.65%.

A second way to assess meaning to the graph is to draw a line vertically from the orange dots to the dotted line. By doing this, you arrive at the historical economic growth rate associated with the spreads. This optimistic approach says current spreads are commensurate with GDP growth of 3-5%.

In times like these it is near impossible to be certain in your economic outlook. More concerning than the current situation, we believe investors are overestimating what economic growth will look like in the next expansion.

In The Decade Long Path Ahead to Economic Recovery – Part 1 Debt, we showed the graph below. The clear takeaway is that the economic growth rate of each successive expansion was less than the one before it.

Given the massive Federal debt supporting the economy, this trend will undoubtedly continue in the future.

Our analysis leads us to conclude the real future economic growth rate will be just above 1%. As such, we state in the article: “Based on this analysis, the economy will not regain pre-COVID economic levels this decade.”

We present more evidence below to help further highlight the gross mispricing of bond spreads.

From Mike Larson at Weiss Ratings:

“Fifty-four companies defaulted on their debts in the second quarter of 2020. That was the most for any three-month period since 2009 in the wake of the Great Recession.

It gets worse. The default wave isn’t anywhere close to cresting.

Moody’s predicts defaults will get worse through 2021. Why? More debt than ever before was ALREADY low-rated and lousy even before the COVID-19 outbreak struck.

And this credit crisis is much more broad-based than anything we’ve ever seen. Retailers and consumer services firms, for instance, are dropping like flies due to plunging in-store sales and crushing debt levels.

Knowing all that, what do you think high-yield “junk” bonds should be doing?

And investors owning this kind of lousy paper — or mutual funds and ETFs stuffed to the gills with it — would be losing money hand over first, correct?

That’s not what’s happening at all!

In fact, junk bonds just had their best month since October 2011.”

“Looking ahead, we find that a sizable share of U.S. corporations have interest expense greater than cash flow, raising concerns about the ability of those corporations to endure further liquidity shocks.”

No one knows with certainty what the future holds. We do, however, know what the present holds. The graphs and commentary shown above do not depict an environment in which investors should accept a bare minimum return for taking risk.

The yield on BBB-rated bonds is now in many cases below the yields of Treasury Bills from 2019. Just think about the irrationality of that one fact.

Corporate bond investors no longer have a voice. The Fed now dictates market levels through direct manipulation and suggestions for future action. Investors must accept yields that bear no resemblance to reality or receive a negative real return on their money.

The Fed is encouraging investors to pick up their speed despite extremely hazardous conditions. While many appear to trust the Fed, the Fed cannot eliminate risk.

We leave you with a quote from David Rosenberg – “The Fed is distorting risk markets on a scale never before seen. They are making a mockery of capitalism and bailing out bad actors. The system is broken.”