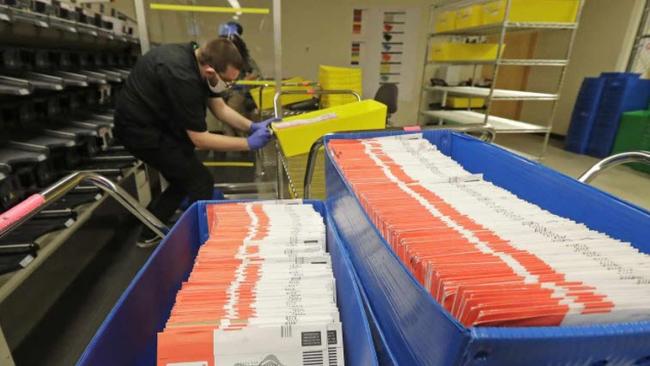 
Authored by Liz Harrington via RealClearPolitics.com,

Democrats and the media are meddling in our elections again. But this is getting absurd…

Never mind every major Postal Service union has endorsed Biden, including the American Postal Workers Union and the National Association of Letter Carriers, which together represent 520,000 active and retired USPS employees. The APWU recently said 2020 is “shaping up to be a major election for our Union,” and view President Trump as a “serious threat.”

But it can’t be a vast conspiracy theory without Hillary Clinton’s projection. “Nothing stops the mail,” the Chardonnay enthusiast tweeted. Except when USPS partnered with unions to allow mail carriers to take time off to try to get Clinton elected, in “systematic violation” of the law.

There was no Russia collusion in 2016. There were no Julie Swetnick “train rapes” in 2018. And there are no disappearing post boxes in 2020.

KATU, the local ABC affiliate in Portland, discovered the bombshell reason mailboxes were on that truck:

“To replace them because they’re old.”

The truth never stops them whipping up a mob.

Susan Rice, always the reliable spreader of Democrat disinformation, is very concerned, despite the fact the Obama administration took at least 12,000 post office boxes off the streets.

“Where have all the collection boxes gone?” the USPS inspector general asked in September 2016. Democrats were too busy hawking their fake dossier to bother noticing Obama and Biden were, by today’s Democrat standards, “trying to dismantle American democracy.”

Louis DeJoy is their new Gen. Michael Flynn. Just someone to project their hysterical political fantasies onto, no matter the collateral damage. Flynn is an American hero, not a Russian asset. (Neither was Carter Page, as Kevin Clinesmith can attest). DeJoy is a logistics professional who successfully ran multibillion-dollar supply chains, not a mail hatchet man. He wasn’t appointed by President Trump, but was unanimously approved by members of the USPS Board of Governors, including a Democrat, after an extensive search. DeJoy will be smeared because he’s a Republican. Never mind Megan Brennan, the former postmaster general he replaced, is a Democrat.

Democrats’ politicization of the mundane is troubling. The media is trying to taint routine maintenance, like transferring equipment to meet demand. Like everything else, the pandemic has required businesses to adapt, and the post office is no exception. But it’s Democrats who contend we must rest our election results on a service that was losing billions every quarter – before the virus hit. Both Donald Trump and Barack Obama have complained about the post office for years. What’s not routine? Sending millions more ballots out when voters never requested them.

Democrats don’t need to invent conspiracies to find problems with vote-by-mail. They could read the local papers. Or open their eyes.

There’s another term for this: ballot harvesting.

They wouldn’t have been charged in California, where it’s legal for anyone to possess as many ballots as they want. That’s what Speaker Nancy Pelosi snuck in her legislation masquerading as coronavirus relief and what Marc Elias and left-wing groups are trying to force through the courts in a dozen battleground states.

The media keeps claiming there’s no evidence of fraud, but immediately hopped on the Democrats’ next conspiracy theory wagon about a “war” on the Postal Service, with no evidence.

The real assault is what Democrats are doing to election integrity with a forced transition to vote by mail overnight. It took the state of Washington five years to switch to vote by mail. How do they prevent fraud? Every voter has to present a photo I.D. to be registered. Safeguards Democrats fight against.

Another fraud: this is all about our health.

Contrary to fearmongering, in-person voting in Wisconsin did not lead to an outbreak. The Centers for Disease Control found social distancing and personal protective equipment works at polling stations. Dr. Anthony Fauci says there is no reason why Americans can’t vote in person in November.

Voting by mail doesn’t prevent you from contracting the Wuhan coronavirus, either. In Wisconsin, there were more cases found in people who voted absentee than in person.

There are many lessons to glean from Democrats’ descent into angry, third-rate conspiracy theorists.

One thing the mob banging pots and pans outside the postmaster general’s door teaches us: they’re not afraid to cast a ballot in person.