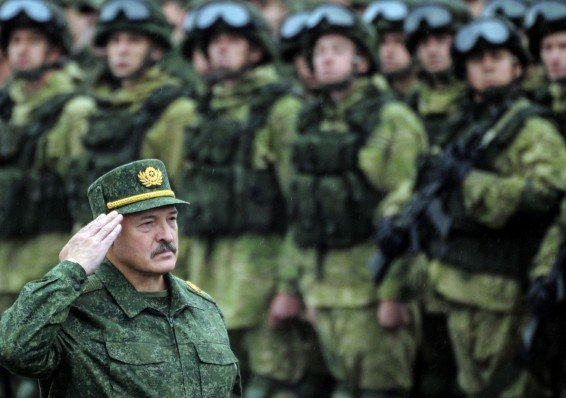 
There are unconfirmed breaking reports that Belarus’ embattled President Lukashenko has indicated he’s ordered troops deployed on the country’s western border with “full combat readiness”. This follows his provocatively telling supporters that “NATO is at the gates” while reaffirming that he wouldn’t let Belarus’ fate be dictated from the outside as both mass protests and widespread strikes threaten is continued rule after the contested Aug.9 election which many chrarge was “rigged”.

“NATO troops are at our gates. Lithuania, Latvia, Poland and … Ukraine are ordering us to hold new elections,” he told supporters at a rally in Minsk on Sunday. He further alleged that NATO tanks and aircraft were deployed a mere 15 minutes from the Belarusian border, something which NATO has since denied.

But NATO has rejected this, with Secretary-General Jens Stoltenberg on Monday asserting, “NATO does not pose a threat to Belarus and has no military buildup in the region,” according to an official statement.

Lukashenko also again hinted that Russia stands ready to support him militarily amid an estimated 200,000 taking the streets in the capital demanding that he step down, or that at least a formal recount is conducted under international monitors.

However, there’s growing consensus that the Kremlin is not wedded not wedded to Lukashenko and may be through with him, yet wants a transition in a way that does not create “another anti-Russian, NATO leaning bulwark on its borders”.

Will we witness game-over for Lukashenko’s 26-year long rule this week?

I agree w all of this by @DmitriTrenin at this point:
“The Kremlin is not wedded to Lukashenko: it has had enough of him. It cannot, however, allow Belarus to follow the path of Ukraine & become another anti-Russian, NATO leaning bulwark on its borders..”https://t.co/FjBNg6TpLk

Here’s RanSquawk’s primer on what’s at stake in Belarus:

EU Response: The bloc, in a joint statement on the 10th August, condemned the improper conduct of the elections and the subsequent social unrest that followed. The EU “considers the results to have been falsified and therefore does not accept the results of the election,”, it said in a press release, “We will continue to closely follow the developments in order to assess how to further shape the EU’s response and relations with Belarus in view of the developing situation”, the statement said. Last Friday, EU Foreign Ministers agreed to commence work on sanctioning Belarusian officials responsible for the electoral results alongside those behind the violent crackdown on peaceful demonstrators. One EU diplomat noted that sanctions are unlikely to be agreed until the end of this week at the earliest. European Council President Michel called for an emergency summit for tomorrow, where a sanctions list is expected to be drawn up.

US Response: A Senior Trump official noted that the mass protests make it clear that Lukashenko’s government can no longer ignore calls for democracy. President Trump called it a “terrible situations”, while senior admin officials said the US is closely watching the developments.

Russia: The Kremlin said Russia is prepared to involve a joint defence treaty with Belarus, following multiple phone calls between the countries’ leaders. Russia said it was ready to help “solve the problems” that have arisen from “external pressure”. A transcript of the call between the leaders noted that Russia “reaffirmed its readiness to render the necessary assistance to resolve the challenges facing Belarus.” The show Russian support followed the Belarusian defence ministry announcing snap military exercises near the Lithuanian border after Lukashenko claimed that Poland, Lithuania and Latvia were conduction a “build up of military might” at the borders.

China: The nation, in contrast to the EU, endorsed Lukashenko as the Belarusian President. Chinese President Xi said he was ready to work with the Belarusian leader to “jointly push forward China-Belarus comprehensive strategic partnership and expand mutually beneficial cooperation between the two countries in various fields”.

COLLISION COURSE: The EU and US urged Russia not to intervene as protesters mounted over the weekend. In the fallout of the summit, EU leaders are also expected to send Russia a formal message to not interfere with matters in Belarus – “There should be no outside interference,” Council President Michel wrote. Furthermore, the EU is also keeping tabs on China’s meddling in what an EU official called “a European affair”, adding that “It would send a very troubling message to EU member states – who are united in the response on Belarus – if China continues to lend Lukashenko support.”

Desks note that the threat of Russian interference could further rile up tensions with the EU; if Lukashenko survives in power, it will be due to heavy-handed crackdowns and repression, backed by the possibility of Russian intervention. Conversely, if the Belarusian leader is ousted, Russia could be strategically radicalised as witnessed in 2014 following the ousting of Ukrainan President Yanukovich. Analysts note that Russia’s strategic cooperation with China has also significantly intensified. “Russian radicalisation in the aftermath of Belarusian destabilisation could therefore paradoxically trigger an intensification of the stand-off between Beijing and pre-election Washington, and by extension between Beijing, Tokyo, Seoul and several Asean capitals – not to mention New Delhi, still smarting from this summer’s clashes,” SCMP writes.