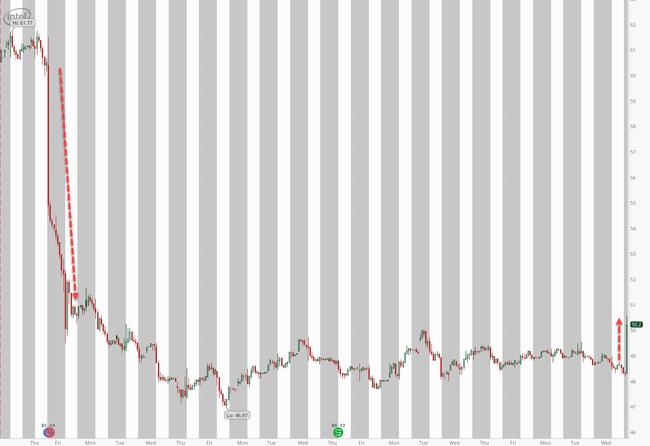 
Just yesterday, we reported that contrary to widespread misperceptions, corporate buybacks have been storming back led by tech firms, and listed many of the companies – besides the tech megacaps of course – that had quietly and not so quietly resumed repurchasing their shares to prop up their stock price (such as Berkshire which repurchased a record amount of its own stock last quarter). We can now not only add one more name to the list, but observe directly how the stock price reacts to something as trivial as a company (issuing debt to) buyback its shares (we already know that a mere stock split is enough to send the stock of a “story” company soaring as the recent Tesla experience demonstrated all too well).

After the close, Intel – whose stock cratered in late July after disappointing earnings revealed the chip maker was far behind on 7nm production – announced it is entering into accelerated share repurchase (agreements to repurchase an aggregate of $10 billion of its common stock. Following completion of these agreements, Intel will have repurchased a total of approximately $17.6 billion in shares as part of the planned $20 billion share repurchases announced in October 2019.

And since this is a time when corporate buybacks – which only benefit the shareholders usually at the expense of employees or future growth – are still frowned upon, the company had to justify the decision by saying that “while the macro-economic environment remains uncertain, Intel shares are currently trading well below our intrinsic valuation, and we believe these repurchases are prudent at this time.”

From the press release:

“We achieved record financial results in the first half of 2020 and raised our full-year outlook as customers rely on Intel technology for delivering critical services and enabling people to work, learn and stay connected. As the ongoing growth of data fuels demand for Intel products to process, move and store, we are confident in our multiyear plan to deliver leadership products,” said Intel CEO Bob Swan.

Under the terms of the ASR agreements, Intel will receive an initial share delivery of approximately 166 million shares, with the final settlement scheduled to occur by the end of 2020. The final number of shares to be repurchased by Intel will be based on the volume-weighted average stock price of Intel’s common stock during the term of the agreements, less a discount and subject to adjustments.

Intel is funding the share repurchases under the ASR agreements with existing cash resources. Strong operating results in the first half of 2020 have contributed to a healthy liquidity balance, which gives Intel the ability to invest in the business during a period of economic uncertainty while also returning capital to stockholders through dividends and these share repurchases. Intel intends to complete the $2.4 billion balance of its planned $20 billion share repurchases and return to its historical capital return practices when markets stabilize.

In kneejerk reseponse, Intel shares jumped as much as 4% after hours, but as can be seen in the chart below, the company will have do announce a whole lot more stock repurchase to recover the price it had before its disastrous earnings report.