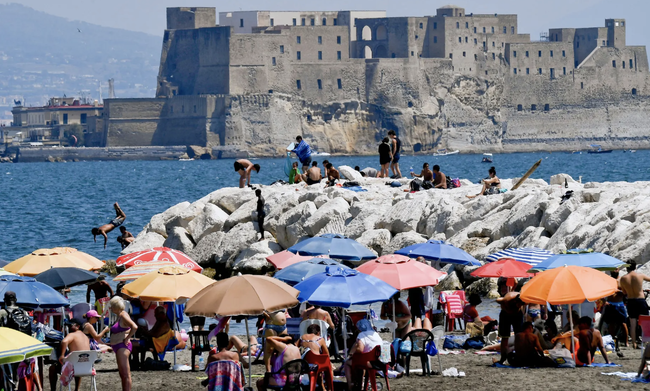 Update (1235ET): Though it apparently wasn’t cited right away, Florida has now passed 10,000 COVID-19 deaths as of Wednesday, if one includes the “non-resident deaths” that the state have deducted from the official “resident” tally, which is widely quoted in the press.

The 174 deaths we reported earlier pushes the total to 10,067, if one also oncludes the 135 non-resident deaths noted in the state dashboard.

The state has counted more than 5k deaths since July 18. It’s the 5th state to achieve this milestone after NY, NJ, California and Texas.

Update (1140ET): Italy’s worrying resurgence started on Saturday, when Italy reported 629 cases in a single day, a rate unseen since May. Now, Italy has done it again, reporting 642 new cases and 7 new deaths. That’s more than the 403 new cases reported yesterday. Hospitalizations were just 866 across the country, with 66 in intensive care.

Young holidaymakers returning from Greece and other places around Europe have been blamed for a large chunk of the new cases as the number continues to rise.

Elsewhere, daily new cases of coronavirus in Spain jump to highest since late April, with 3,715 reported Wednesday, according to Spain’s Health Ministry. The Madrid region saw the biggest surge, with 1,535 new cases in the past day, while the ministry said 131 deaths were recorded in past seven days.

Florida reported 584,047 cases on Wednesday, up 0.7% from a day earlier, which is below the state’s 7-day average of 1%, a sign that the outbreak in the state has continued to decelerate.

The new daily rate of people testing positive for the first time fell to 7.1% for Tuesday, the lowest since June 14. The state has reported 33,146 new cases in the past seven days, the fewest in a comparable period since late June. Deaths among Florida residents reached 9,932, an increase of 174.

NYC meanwhile saw its positive test rate fall to its lowest since the pandemic first hit, Mayor Bill de Blasio said, with a 0.24% positivity rate over the past week.

Update (1015ET): As cases in Hawaii have “surged” over the past week (at least, that’s how it was described by the mainstream press), Hawaiian Gov. David Ige has decided to push back the start of a program that was supposed to help revive the state’s critical tourism industry.

Ige said he will push back the start of a program that would allow some tourists to bypass Hawaii’s 14-day quarantine restriction for travelers from Sept. 1 to Oct. 2.

“We will continue to monitor the conditions here in Hawaii as well as key markets on the mainland to determine the appropriate start date for the pre-travel (COVID-19) testing program,” he said.

The planned Sept. 1 start of a program that would allow out-of-state visitors to bypass Hawaii’s strict 14-day quarantine upon arrival by presenting a negative COVID-19 test at the airport has been delayed until at least Oct. 1, Ige said late Tuesday.

“We will continue to monitor the conditions here in Hawaii as well as key markets on the mainland to determine the appropriate start date for the pre-travel (COVID-19) testing program,” he said.

The delay, the second since the program was announced in June, will affect passengers who bet on the Sept. 1 reopening and bought airline tickets to Hawaii, airline flight schedules and, of course, Hawaii’s decimated tourism industry. The quarantine began in March and the latest extension means much of the tourism year will be wiped out as few visitors want to be confined to their hotel or vacation rental.

Ige said the state will announce a new date in advance so “that the hospitality industry would have the time they need to staff up” and support the new COVID-19 option for visitors.

Many European economies have been scrambling to revive their battered tourism industries, including Spain and France. Some have been criticized for prioritizing tourism over protecting citizens from COVID-19.

In other news, authorities in Toulouse, a city in France, are requiring face masks to be worn throughout the city starting on Aug. 21 as COVID-19 infections continue to climb.

Global COVID-19 cases have passed more than 22 million, with the US and Brazil still leading with the most cases globally. Here’s a quick breakdown of the countries and numbers.

Meanwhile, global deaths are nearing 800,000, with 781,756 deaths total. A trend of slowing cases has emerged in recent days, but it’s still unclear whether it will hold.

On Tuesday, signs of resurgence continued to appear in Europe and Asia, as the world’s biggest outbreaks in the US, Brazil and India have continued to slow, and it looks like we’re headed for a similar trend on Wednesday.

First, Iran surpassed 20,000 confirmed deaths on Wednesday, according to its health ministry. It’s the highest death toll for any Middle Eastern country. The milestone comes as Iran moves ahead with university entrance exams for more than one million students. Nearby, the UAE, fresh off its landmark deal with Israel, reported a resurgence, reporting 435 new infections on Wednesday, the biggest number in more than a month.

As Norway and Denmark ponder reopening their borders to neighboring Swedes, Nordic neighbor Finland has removed most EU countries from its “green travel list,” effectively imposing “Europe’s toughest” border restrictions, with only a handful of arrivals from a small number of states now allowed to enter the country without any restrictions.

Only people coming from Italy, Hungary, Slovakia, Estonia and Lithuania will now be allowed into Finland without proving they have a valid reason for travel. They must also self-isolate for 2 weeks. Arrivals from a number of non-EU countries including Georgia, Rwanda and South Korea will continue to be freely permitted when the new measures take effect on Monday. Hong Kong recorded the lowest number of new coronavirus infections since its latest outbreak started last month.

China and the US are beginning to ease restrictions on transnational flights, with the US Department of Transportation saying it would allow the four Chinese passenger airlines currently flying to the US to double flights to eight weekly round-trips, as China simultaneously agrees to allow US carriers to double their flights to China.

In today’s dose of vaccine news, Brazil’s health regulator has approved final-stage trials for J&J’s vaccine candidate,  the fourth to win approval for testing in the country.

After reporting a record jump in new cases on Wednesday morning, Greece ordered citizens to wear masks both indoors and outdoors on the island of Mykonos and in the northern region of Chalkidiki, two of the country’s biggest hotspots. The authorities also decided to suspend any kind of events and prohibit gatherings of more than nine people in both areas, which are popular with tourists. The measures come after Greece reported 269 new COVID-19 cases on Tuesday, a record single-day spike since the beginning of the pandemic.