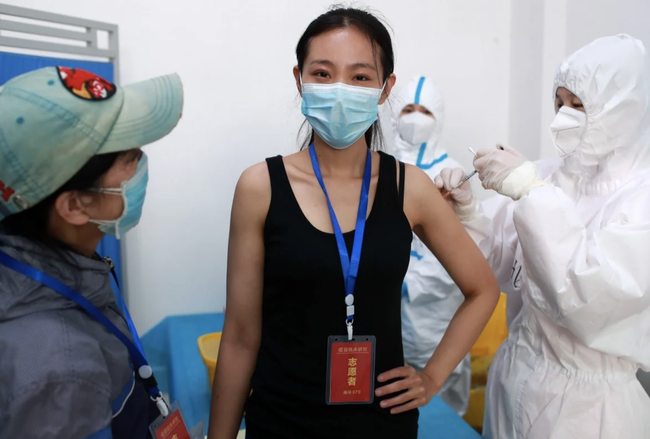 
Beijing is stepping up the drumbeat toward the eventual launch of CanSino’s adenovirus-vector COVID-19 vaccine by lowering China’s standards for vaccine efficacy.

Days after approving a patent for CanSino’s vaccine, a ploy that we joked was drummed up because President Xi was jealous of all the attention afforded Putin, China is now saying that any vaccines approved by its regulators must be only 50% effective, and demonstrate efficacy for a period of at least 6 months.

It’s just the latest repudiation of the early “science”-based stance that immunity to COVID-19 would almost certainly be permanent, or at least the questions raised by researchers might be easily or credibly dismissed. But the point is, they haven’t been dismissed yet, and there’s some reason to suspect this could be an issue. The NYT ran a story urging readers not to worry about decaying immunity to the virus. However, in a telling example of how to read between the lines, the story was run in the “Opinion” section.

News of China’s new standards, which have been approved by the CCDE – the CDC’s Chinese Center for Drug Evaluation – will apply to any vaccines used on the mainland.

Presenting the information with what has unfortunately become a chronic, pro-CCP spin, the SCMP informed readers that 50% efficacy – while it sounds more than mildly troubling, since this is a matter of life and death, not a song by Meat Loaf – is actually in line with the WHO’s standards, and that China’s vaccine candidates are among the “four leading candidates” in the world. We suspect some western “experts” might disagree.

Covid-19 vaccines must have an efficacy rate of 50 per cent and provide at least six months’ immunity if they are to be approved for use in China, the country’s drug regulator has announced.

The document said also that the regulator would consider granting emergency use of vaccines that have not yet completed their final phase of clinical trials.

Chinese companies are among the forerunners in the race to produce a vaccine for Covid-19, with four candidates in final testing. A total of 29 products are undergoing clinical trials around the world, seven of which are in the final stage.

On Friday, China issued several documents setting out the standards for clinical trials and research on vaccines, including those based on the unproven mRNA platform.

China’s requirement for a minimum 50 per cent efficacy – which means the vaccine would protect half of those injected with it – is in line with the benchmarks set by the World Health Organisation (WHO) and US Food and Drug Administration (FDA).

SCMP also tried to spin this blatant lowering of standards as a ‘step up’ from the US. It claimed that the FDA has no “period of immunity” requirement comparable to China’s 6-month requirement. However, in the US, as we noted above, the notion that the virus might assume a flu-like persistence is effectively denounced as bunk by the mainstream media, since it cuts against the pro-lockdowns-at-all-cost views at CNN and MSNBC.

Though both China and the US are accelerating Stage 3 clinical trials, which can often take years, a Chinese scientist told the SCMP that researchers would be extra vigilant in looking for problems during development. Because there’s one potential complication that could sink a vaccine: A phenomenon known as antibody dependence enhancement.