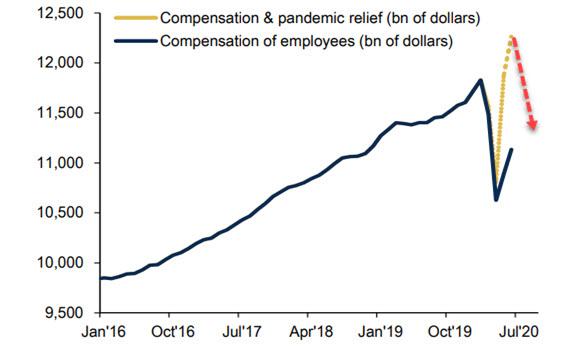 
Contrary to the prevailing narrative, the immediate aftermath of the covid shutdowns was a golden age for those Americans without a job (or who don’t want to get a job) and who rely on government handouts: as the chart below shows, the $2.8 trillion in fiscal stimulus (so far) in 2020 – the biggest stimulus ever approved during US peacetime – has been as BofA puts it, “a rousing success” as by May government transfers completely plugged the gap, bringing aggregate compensation to the same level as in February.

In other words, while aggregate compensation would have been devastated in April May and June, the most recent reading going back to mid 2018 levels, thanks to the pandemic relief, Compensation for Americans has never been higher and consumer spending by lower-income households has significantly outpaced middle and higher income. In fact, by mid-June spending by lower-income households had already completely normalized.

But, as we discussed late last week in “Beyond The (Benefits) Cliff: The Wile E. Coyote Moment For The US Consumer” the generous short-term unemployment insurance has now ended without being rolled over, and unless the fiscal stimulus is fully extended, the US economy faces a sharp hangover as compensation – even with the benefits of Trump’s executive orders – suddenly plunges once again (red arrow in chart below).

The result, as Walmart and Kohl’s both discussed in their earnings calls this morning, is that around the end of July, consumer spending fell more for lower-income households, no doubt impacted by the sharp decline in unemployment benefits that occurred during this time.

Why? Because as we also discussed last week, with stocks refusing to drop, the last trump card the Democrats have is to force another sharp economic crunch in the next 77 days ahead of the election, to spark anti-Trump sentiment as millions more find themselves without a job.

It’s also why both Trump and the GOP are taking a major gamble by not agreeing to Democrat demands for a massive stimulus (at last check the bid/ask on the 5th stimulus round was $1 by # trillion) as the alternative is another round of economic devastation in the coming weeks ahead of the November election.

And since Democrats are perfectly happy to hold of conceding to republican demands for a smaller package, and since the Trump executive orders will only replenish a modest amount of the fiscal stimulus that has already expired, we are confident it is only a matter of time before Congress announces a “major deal”, one which sees US debt explode higher by several trillion, sends the dollar sliding more and pushes gold to new all time highs.