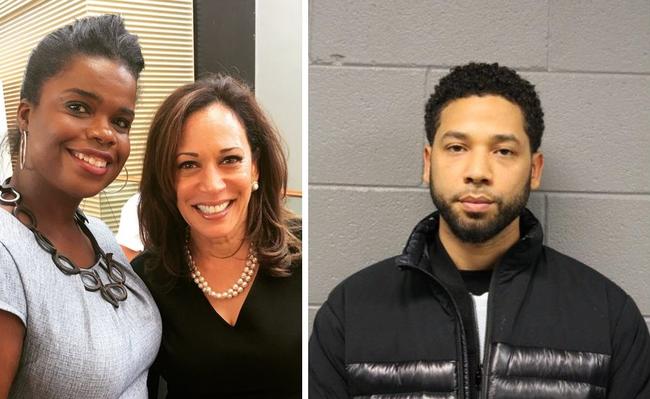 
Before the pandemic, we had Jussie Smollett – the former “Empire” star whose racist 2019 hate-crime hoax destroyed his career, stoked racial tensions nationwide, and cost Chicago taxpayers a reported $130,000 in police overtime thanks the MSM and prominent liberals who breathlessly reported Smollett’s lies as fact.

And according to findings by a special prosecutor tasked with investigating what looked like a massive cover-up by the Cook County DA’s office, State’s Attorney Kim Foxx and her assistant prosecutors committed ‘substantial abuses of discretion,’ but did not break the law.

To review, Smollett claimed that two white Trump supporters in MAGA hats assaulted him on a freezing cold January night at 2 a.m., calling him racist and homophobic slurs before beating him up and leaving a noose around his neck (which he was wearing when police arrived). The actor said he chased the two white men off after the alleged ‘hate crime.’

Kamala Harris – who mentored Cook County DA Kim Foxx and was coincidentally working on an anti-lynching bill at the time with Sen. Cory Booker (D-NJ), called it a ‘modern day lynching.’

.@JussieSmollett is one of the kindest, most gentle human beings I know. I’m praying for his quick recovery.

This was an attempted modern day lynching. No one should have to fear for their life because of their sexuality or color of their skin. We must confront this hate.

I’m so excited that @KamalaHarris has decided to run for president. I would not be where I am today without her guidance during my first run for political office, and she has continued to mentor me as I work to reform the criminal justice system in Cook County. —KF pic.twitter.com/O241FGKKMs

Except, the ‘attackers’ turned out to be Smollett’s twin, drug-dealing, Nigerian bodybuider brothers from Nigeria – one of whom he was in a sexual relationship with. The brothers later told police Smollett paid them to stage the attack, while Smollett says they’re lying.

Despite overwhelming evidence, including the brothers confession and video of them buying rope, Foxx’s office dropped a 16-count Grand Jury indictment against Smollett after Michelle Obama’s former Chief of Staff, Tina Tchen, called in a favor – asking that Smollett’s case be placed in the hands of the FBI.

“Spoke to the Superintendent Johnson,” Foxx told Tchen in a Feb. 1 email obtained by the Chicago Tribune, in reference to Chicago Police Superintendent Eddie Johnson. “I convinced him to Reach out to FBI to ask that they take over the investigation.”

Tchen, who has denied trying to affect the outcome of the case, admitted to contacting Foxx and later evaded a subpoena in the case.

Did we mention Smollett’s sisters worked for the 2008 and 2012 Obama campaigns? Or that Smollett and Kamala Harris attended a 2018 protest together?

In a Wednesday statement following the conclusion of his investigation into the Smollett case, special prosecutor Dan Webb said that Foxx and her assistant prosecutors severely mishandled the case – which was marked by chaos and false or misleading statements, as well as a legally meaningless recusal by Foxx.

To review, straight from the horse’s mouth (emphasis ours):

The OSP developed evidence that establishes three substantial abuses of discretion and failures by the CCSAO in prosecuting and resolving the Initial Smollett Case.

Yet, much like the Horowitz report, everyone gets a slap on the wrist for misconduct which ‘didn’t rise to the level of criminal charges’ – except Smollett, who was sued on April 12, 2019 by the city of Chicago for $130,105.15 in overtime that the Chicago PD says they spent chasing down Smollett’s lie. The actor has filed a counter-suit against the city, claiming that he was the victim of “mass public ridicule and harm.”

Then, in February of this year Smollett was re-indicted on six counts related to making false police reports.