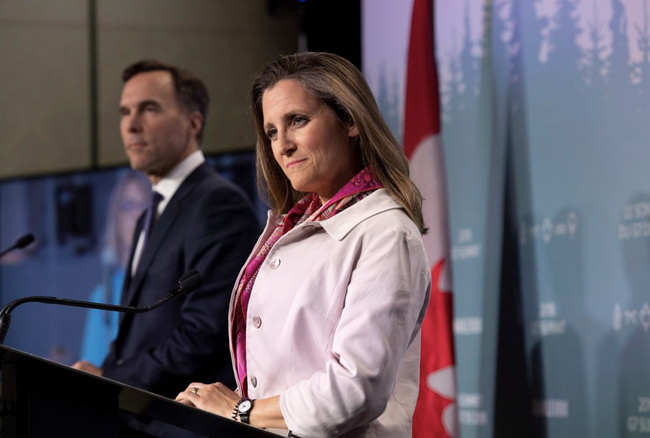 
Chrystia Freeland isn’t quite a household name in the US, although her profile expanded substantially after leading trade talks with both the EU and the US and Mexico. But that could soon change as the avowed Russophobe has just been sworn in as Canada’s Finance Minister in PM Justin Trudeau’s latest cabinet reshuffle.

Freeland, a former Rhodes Scholar who previously handled Canada’s Foreign Policy portfolio as Trudeau’s Foreign Minister (and trade minister, among other positions, as well as being an MP), has become the first woman to hold the title of Finance Minister in Canada; she is also a deputy prime minister.

Interestingly enough, Canada’s Globe & Mail, a Liberal-leaning national broadsheet and one of Canada’s most popular newspapers, made no mention of the scandal-plagued departure of Bill Morneau, the Liberal Party politician who resigned today amid a scandal over his failure to repay a charity for associated travel costs (you can read more about that at the BBC).

But by elevating Freeland once again, Trudeau is sending a sign to Russia, and to the broader foreign policy establishment, that as President Trump tries to dismantle the national security and foreign policy “consensus” in the US, his Canadian colleague is doubling down on it.

Ironically, Trudeau is now preparing to try and “prorogue” Canada’s parliament, though the context is slightly different from when Boris Johnson prorogued the British Parliament, effectively shutting it down, as it will effectively act as a “reset” for his agenda following a string of scandals that have roiled Canada’s Liberal Party.

For those who haven’t followed our coverage of Freeland’s rise in Canadian politics, Matthew Ehret once said that “Freeland has become a bit of a living parody of everything wrong with the detached technocratic neo-liberal order which has driven the world through 50 years of post-industrial decay.”

Freeland has made it clear that she understands well that there is a fundamental difference in cultural identities of the “new rich” relative to the older oligarchic families which she serves. In the 2011 Rise of the New Global Elite, she describes it as follows: “To grasp the difference between today’s plutocrats and the hereditary elite, who “grow rich in their sleep” one need merely glance at the events that now fill high-end social calendars.”

Freeland then breaks down the categories of “new plutocrats” into two subcategories: the good, technocratic friendly plutocrats who are ideologically compatible with the New World Order of depopulation, such as Bill Gates, Warren Buffet, George Soros, et al and the “bad” plutocrats who tend not to conform to the British Empire’s program of global governance and depopulation under the green agenda.

We imagine Bill Gates and George Soros will be thrilled.