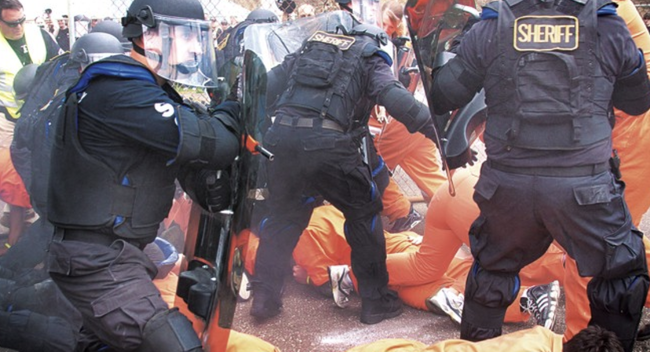 
Pandering big-city politicians apparently still haven’t figured out that letting violent criminals out of prison during an economic downturn, and then not just asking, but demanding, that they wear masks whenever they’re in public is a recipe for disaster. But just in case you, dear reader, have recently started to question the progressive orthodoxy that imprisoning criminals during a pandemic is deeply unethical, here’s the New York Daily News to remind you just how badly treated prisoners are.

The mainstream press and “liberal” publications would have readers sympathize with the prisoners, and rationalize the riot as an uprising prompted by COVID-19 outbreaks, and the strict measures adopted to prevent them. Prisoners have taken to rioting for better treatment. During a particularly deadly prison riot in San Diego yesterday afternoon (California’s prison system is notorious throughout the US for the ruthless gangs that run the state’s pens) a group of 20 prisoners surrounded and attacked six prison guards in broad daylight.

While the Daily News report offered scant details on the assault, it’s fair to say that the temporarily dominant prisoners savagely bludgeoned and stabbed the group of officers.

The six officers suffered stab wounds, lacerations and possible broken bones and were taken to a nearby hospital. Two inmates were also hospitalized and several others were treated on prison grounds.

The California Department of Corrections and Rehabilitation did not immediately return a request for updated information on their conditions.

Such brutal treatment, however, hardly compares to the indignities and depredations suffered by the prisoners on a daily basis. Imagine being told when you can eat, when you can sleep, when you can shower, instead of binge-watching Friends for six hours on a Wednesday while swearing to your girlfriend that you’ve been looking for work. Two of the prisoners were also hospitalized for wounds sustained during the ‘protest’, while others were treated at a prison infirmary.

A group of inmates at a San Diego prison allegedly attacked corrections officers in the recreation yard Sunday afternoon, according to the California Department of Corrections and Rehabilitation.

About 20 inmates were in the yard at the Richard J. Donovan Correctional Facility around 4 p.m. when “some began an attack on six correctional officers,” prison officials said.

The inmates allegedly ignored directions to stop and officers resorted to “less-lethal measures,” although the CDCR did not specify what said measures include. A warning shot was also fired.

The genesis of the incident is now being investigated. We’re definitely curious to see what the prison’s investigative unit turns up.

Prison riots aren’t unique to the US, but throughout the sweep of modern history, when stability wavers, institutions like prisons are often the first places where order deteriorates, supplanted by chaos, and all the brutality that comes with that.

Apparently, Donovan (the prison where the riot occurred) is no stranger to this type of violence, even before the COVID era. A similar riot unfolded last April.

While CNN covered that last incident, we didn’t see a story this time around.

I realize it’s a Sunday afternoon, but is there really no San Diego media reporting yet on the riot at Donovan prison in Otay?

Which begs the question: is covering prison riots ‘racist’ now?