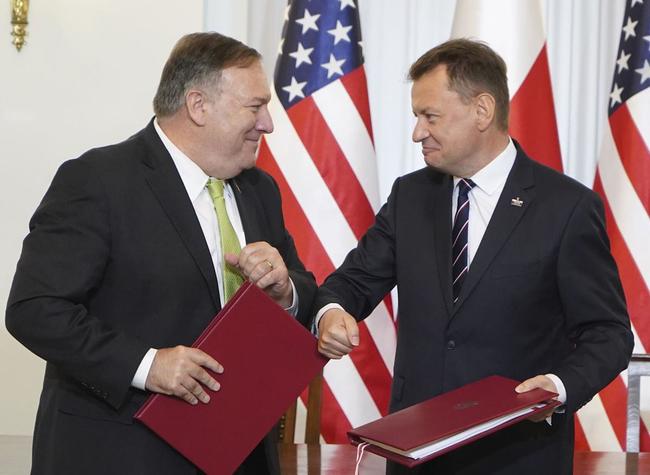 
Secretary of State Mike Pompeo was in Poland Saturday at the conclusion of a four-nation tour of Europe, where crucially he inked a new defense pact with the Eastern European country at a moment Russia has consistently been accusing Washington of provocative and ‘irresponsible’ military build-up along its western border.

“Today, my Administration signed a historic Enhanced Defense Cooperation Agreement with the Republic of Poland,” President Trump said in a written White House statement, The Hill reports. “This agreement is the culmination of months of negotiations with our Polish allies following the two joint declarations I signed with President Duda last year.”

Sure to anger the Kremlin further is the key detail in the deal which adds at least 1,000 more American troops to Poland.

Though a somewhat small addition, taking the current some 4,500 US troops stationed in Poland to at least 5,500 as part of the new pact, it’s hugely symbolic in terms of Pentagon plans in the former Soviet-satellite country.

It comes in the wake of Trump’s controversial Germany draw down, which Secretary of Defense Mark Esper earlier this month cast as having the benefit of reinforcing NATO’s south-eastern flank near the Black Sea, due to the redistribution of American forces. It’s expected that many could go to Baltic countries as well as Italy.

Wheels down in Poland. Excited for discussions on the security of @NATO’s Eastern Flank, 5G security, and U.S.-Polish energy and economic cooperation. pic.twitter.com/PP5EfC1N8M

Two weeks ago Polish Defense Minister Mariusz Blaszczak said a deal had been in the works in connection with troop redeployment from Germany. Blaszczak had previewed the talks during a Polish public radio broadcaster interview. “At least 1,000 new soldiers will be deployed in our country,” he said at the time.

He did nothing to soften rising tensions with Moscow: “We will have an American command in Poland. This command will manage the troops deployed along NATO’s eastern flank,” he announced provocatively.

Meanwhile, last month it was reported that the Polish proposal to rename a base “Fort Trump” – which would host US troops in the East European country – has crumbled over disagreements related to funding as well as the question of precisely where the soldiers would be garrisoned.