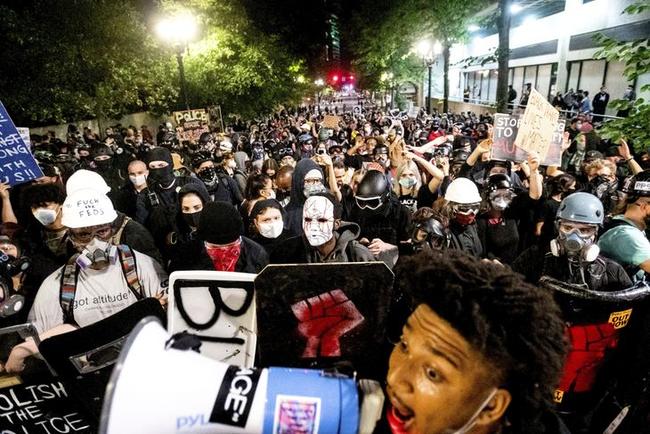 
Authored by Victoria Taft via PJMedia.ocm,

Scores of the 500 people who were arrested during the nearly 75 days of violent Portland riots will have their charges dropped by the new Black Lives Matter-approved district attorney.

Multnomah County District Attorney Mike Schmidt announced that his default position is not to prosecute and that most crimes by rioters will be forgiven and forgotten.

That list of crimes includes interfering with a police officer, disorderly conduct, and rioting.

Multnomah DA Mike Schmidt on crimes that presumptively fall under this category:

Attacks on police officers and resisting arrest will be scrutinized based on whether – and we’re not making this up – police caused rioters to react because they used tear gas or other crowd-control measures causing rioters to “instinctively lash out.”

…the instinctive reaction of people who have been gassed repeatedly, who have been struck with kinetic projectile weapons, and who have seen other protestors arrested in ways they deeply disapprove of.

He told Oregon Public Broadcasting that “his attorneys will scrutinize every case to determine if the person’s intent was to resist arrest or injure a police officer.”

Multnomah DA Mike Schmidt says some of the actions of protestors represent “the instinctive reaction of people who have been gassed repeatedly, who have been struck with kinetic projectile weapons, and who have seen other protestors arrested in ways they deeply disapprove of” pic.twitter.com/L7B4ue5ucH

That’s right. Schmidt basically said that if an assault on a police officer or resisting arrest occurred when police were clearing an area with tear gas, for example, that he would consider dropping those charges.

[We’ll take] a particularly hard look at resisting arrest and assault of a public safety officer if those cases occurred when an individual was being tear gassed or otherwise exposed to a use of force at the time of the resistance.

His staff plans to determine the intent with which the rioter used violence to determine whether he or she is worthy of prosecution or “restorative justice.”

He told the local taxpayer-funded radio station that “the presumption on a lot of these cases that are listed out there is that we won’t prosecute… But if there are egregious circumstances or something about the case that stands out, we can always choose to prosecute.”

Schmidt told reporters at a news conference today that being caught up by police while simply protesting will not be prosecuted.

… [I]f you are a person who is out there demonstrating and you get caught up in the melee and you get arrested … those are the kind of cases we’re talking.

Violating curfew during civil unrest will no longer be prosecuted.

Good luck, Portland. The city is at 75 days of riots and now most of the rioters won’t see the inside of a courtroom much less the inside of a jail cell. That means there will be almost no disincentive to rioting. It’s open season on Portland.