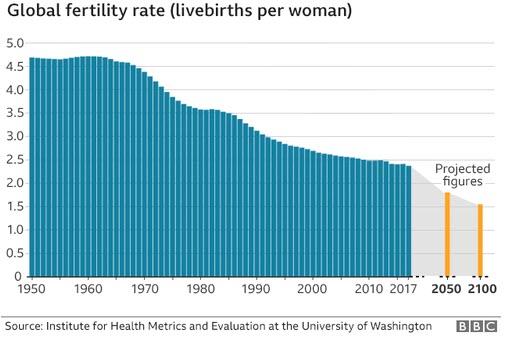 
A new study from by the Institute for Health Metrics and Evaluation (IHME) at the University of Washington, and reported in AFP, finds that the earth is projected to have two billion fewer people by the next century than current United Nations projections forecast for “normal” global development.

It forecasts a population peak by the 2060’s at an estimated 9.7 billion people, after which a steep decline will ensue down to 8.8 billion by 2100.

Currently, the global fertility rate stands at 2.4, but based on the study’s numbers, it’s expected to be at a “jaw-dropping” 1.7 by end of the century, as one the main authors Professor Christopher Murray described.

The study found alarmingly that 23 countries are expected to see their total population cut in at least half by the year 2100, among them include Italy, Japan, Poland, Portugal, South Korea, Spain and Thailand.

Some of the examples listed in the report are as follows:

Astoundingly – or perhaps entirely to be expected – mainstream media is hailing it as a “success story” given that it’s not about sperm count, but more and more women simply choosing to not have children.

For example BBC wrote, “It has nothing to do with sperm counts or the usual things that come to mind when discussing fertility. Instead it is being driven by more women in education and work, as well as greater access to contraception, leading to women choosing to have fewer children.”

“In many ways, falling fertility rates are a success story,” BBC concluded, echoing some of the authors of the original study.